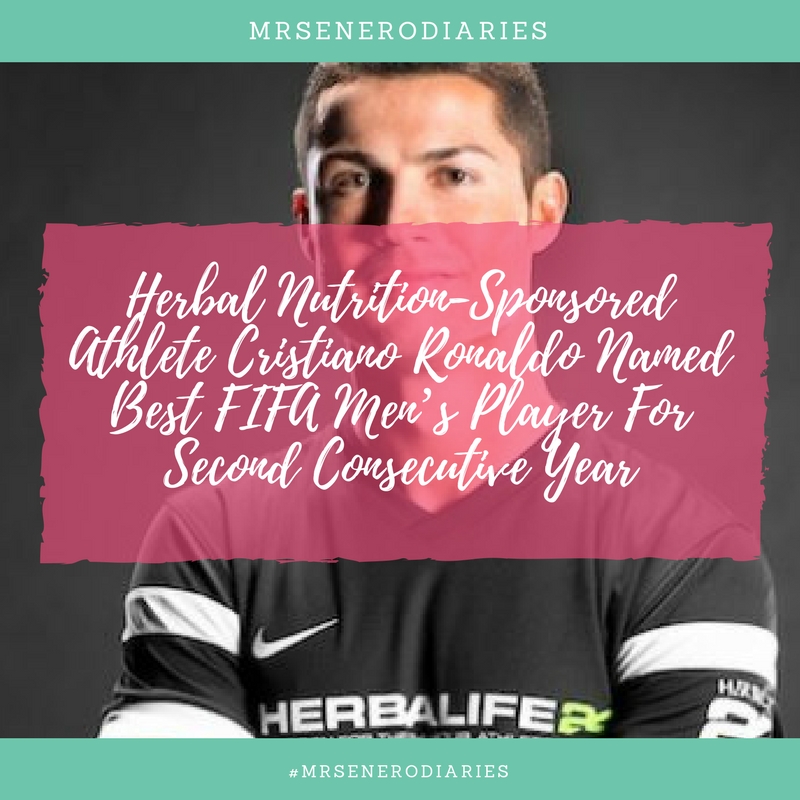 International football super star Cristiano Ronaldo, an Herbalife Nutrition-sponsored athlete since 2013, was recently named “The Best FIFA Men’s Player” for the second consecutive year. The award was determined through a combined voting process that included the votes of team captains and managers from national teams all around the globe, an online public ballot of football fans, and votes by a select group of global media representatives. “Cristiano proves once again that his dedication on the field and commitment to nutrition has elevated him to the top of his game, earning him one of FIFA’s top honors, The Best Men’s Player Award,” said Rich Goudis, CEO of Herbalife Nutrition.

Ronaldo, named the most famous athlete in the world by ESPN, adds to other major awards and accomplishments in 2017. He won the 2016/17 UEFA Men’s Player of the year for the second consecutive year, after once again leading Real Madrid to the UEFA Champions League title and finishing as the top goal scorer, as well as helping his team win the Spanish La Liga cup. In 2017, he also became the first player to score 100 goals in UEFA Champions League and European competitions. He currently holds four Ballon d’ Or titles, the annual football award presented by France Football, and is in the running this year for his fifth.

Herbalife Nutrition-sponsored athletes use Herbalife® products before, during and after
training and games. As part of its ongoing commitment to improving sports nutrition and
performance, Herbalife Nutrition launched Herbalife24® CR7 Drive in collaboration with Cristiano Ronaldo, a sports drink designed specifically to meet the nutritional needs of the global soccer legend and benefit athletes of all levels.

Herbalife Nutrition is a global nutrition company whose purpose is to make the world healthier and happier. We have been on a mission for nutrition – changing people’s lives with great nutrition products &amp; programs – since 1980. Together with our Herbalife Nutrition independent distributors, we are committed to providing solutions to the worldwide problems of poor nutrition and obesity, an aging population, skyrocketing public healthcare costs and a rise in entrepreneurs of all ages. We offer high-quality, science-backed products, most of which are produced in Company-operated facilities, one-on- one coaching with an Herbalife Nutrition independent distributor, and a supportive community approach that inspires customers to embrace a healthier, more active lifestyle.

Our targeted nutrition, weight management, energy, fitness and personal care products are available exclusively to and through dedicated Herbalife Nutrition distributors in more than 90 countries. Through our corporate social responsibility efforts, Herbalife Nutrition supports the Herbalife Family Foundation (HFF) and our Casa Herbalife programs to help bring good nutrition to children in need. We are also proud to sponsor more than 190 world-class athletes, teams and events around the globe, including Cristiano Ronaldo, the LA Galaxy, and numerous Olympic teams.

Herbalife Nutrition has over 8,000 employees worldwide, and is traded on the New York Stock Exchange (NYSE: HLF) with net sales of approximately $4.5 billion in 2016. To learn more, visit Herbalife.com or IAmHerbalife.com. Financial information is available on ir.herbalife.com.