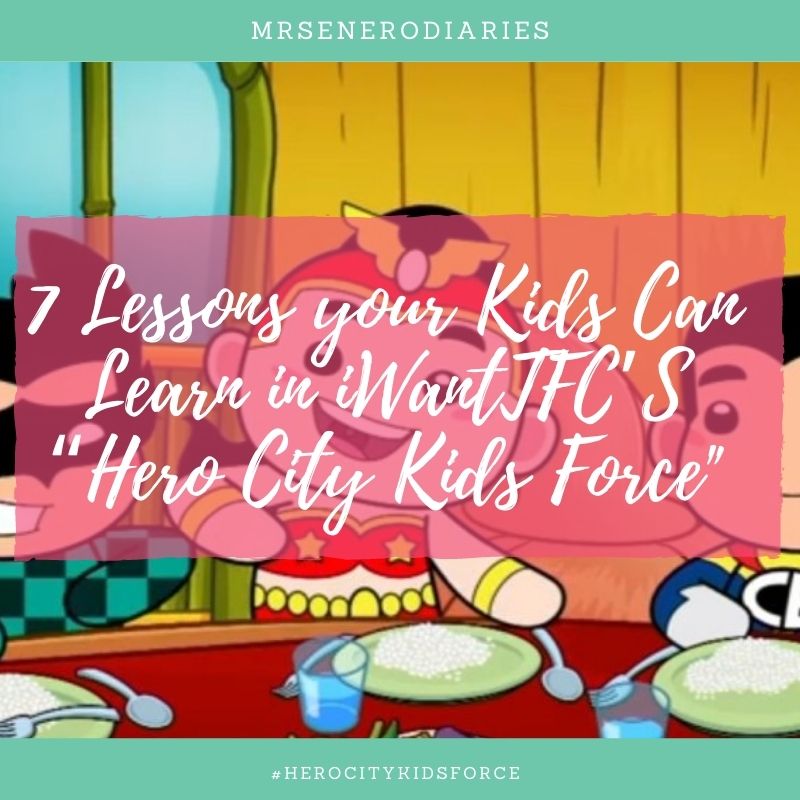 Having a hard time getting your kids to eat veggies or pick up their toys after playtime? Don’t fret because Darna, Captain Barbell, and Lastikman are here to save the day! The trio of kiddie superheroes is featured in iWantTFC’s Filipino animated series “Hero City Kids Force,” which will keep kids engaged while learning positive values, acts of kindness, and important life lessons along the way. The show has everything you and your kid could ask for lovable characters, fun-filled missions, engaging visuals, and a catchy theme song.

Here are some valuable lessons your kids can pick up from the show:

1.    Cleaning up after yourself

Cleaning up your own mess, such as putting back your toys and washing your own dishes, is not just for your own good and for maintaining an orderly environment. It is also out of respect for the people you live with – this is one of the lessons that Tita Joyce, the superheroes’ guardian, puts emphasis on.

For the first mission in the series, evil scientist Dr. Sternberg creates a slimy garbage monster to trash Hero City as the superheroes band together to clean up his mess. As they eliminate the evil creature and restore cleanliness in Hero City, the superheroes teach the citizens about tidiness and to avoid littering to maintain a spick and span environment. Darna also tells Lastikman that he should tidy up his own mess because it is important to be a good role model by leading by example.

The superheroes’ playmates, Maya, Andres, and Nono McCoolit, despise eating vegetables and would make up any excuse just to avoid eating them. But their perception of vegetables changes when they learn that this is the “secret weapon” that keeps Darna, Captain Barbell, and Lastikman strong and full of energy to take down their enemies. Thanks to the superheroes, the McCoolits learn that eating healthy has a lot of benefits for their bodies and this will help them in getting the sufficient nutrients they need in order to have a productive day.

3.    Being careful with bad jokes and pranks

Having fun isn’t bad at all but we should also learn that it has to have its limits. Darna, Captain Barbell, and Lastikman fall victim to one of the McCoolits outrageous pranks, which causes chaos in Hero City. To make things worse, Dr. Sternberg and his sidekick Cyborgana create a gun blaster filled with bad jokes in order to cause fights among the citizens.

As the superheroes resolve the issue, they teach the McCoolits that bad jokes and pranks have their consequences because they could result in harmful actions and fights in relationships. In the end, Darna reminds everyone to be mindful of their jokes because it could hurt the feelings of others and it is equally important to apologize when needed.

4. Proper use of gadgets

Danger looms in Hero City when Cyborgana unleashes an evil hypnotic game app that lures the citizens to be unproductive and glued to their gadgets the whole day. With the help of Tita Joyce, the superheroes immediately realize the negative effects of the excessive use of electronics. Even if gaming apps offer entertainment, the superheroes remind the citizens that not all apps are safe and that we should still prioritize our responsibilities and only allot a reasonable amount of time for playing gaming apps.

An evil petnapping incident caused by Dr. Sternberg makes Lastikman realize a very important lesson as the owner of his lovable dog Walastik – that being a pet owner comes with a lot of responsibility. Walastik causes trouble in the superheroes’ household because of his unruly behavior when he chews on all of their belongings and eats all the food. Lastikman realizes that taking care of Walastik means that he is also in-charge of training him on the dos and don’ts as a dog and making sure that he is always healthy and has good hygiene. Darna and Captain Barbell also teach Lastikman that pets also deserve love and affection just like how humans interact with each other.

Despite having their own unique powers and strengths, Darna, Captain Barbell, and Lastikman rely heavily on their teamwork and tight bond to take down their enemies. Lastikman, who is the youngest member in the group, loves to play around and have fun but with Darna and Captain Barbell’s words of encouragement, he learns how to strike a balance between playtime and serious activities. Because they care for one another and value their friendship, the three superheroes never fail to remind each other to be self-confident, to never give up, and to have trust in one another in order to achieve their goals.

As the guardian of the superheroes and of the McCoolits, Tita Joyce always puts an emphasis on being responsible not just for oneself but for the entire group as well. In the show’s episodes, it is evident that Tita Joyce wants the kids to practice proper discipline in the way they go about their day-to-day activities. The superheroes, meanwhile, learn how to follow the rules and at the same time, respect those who are older than them.

Catch the remaining episodes of “Hero City Kids Force” every Saturday at 10 AM for free on the iWantTFC app and website (iwanttfc.com). Enjoy watching iWantTFC on a bigger screen through select devices on VEWD, ROKU and Amazon Fire streaming devices, Android TV, select Samsung Smart TV models, Telstra TV (in Australia), and VIDAA for select countries. iWantTFC is also available via Chromecast and Airplay. For the complete list of compatible devices, sign in instructions, and account activation, visit https://iwanttfc.com/help#tfc-on-smart-tv.